I've had a disc brake equipped cyclocross bike in my garage since last spring; the Bianchi Zurigo Apex Disc. I also have a road bike that's quite fun to pedal that weighs 7 pounds less than said 'cross bike. I rode that 'cross bike probably as much if not more than my road bike in 2014.

Here are two reasons why; both of which are grounded in the belief as I get older, that riding a bicycle needs to be fun. When it stops being fun, hang up the chamois.

1)- No matter how you approach your training rides, hard efforts are still hard efforts-- I learned this last August while attending the Cycle Smart Cyclocross camp in South Carolina. +Adam Myerson did a round of Q&A with us campers on the first night and much of it revolved around training. I don't have a power meter but I do have a heart rate monitor and a Garmin that tells me my duration of efforts. Sustained efforts at a set level, repeat until finished.

2)- Riding the disc cyclocross bike opened up my rides to much more than just pedaling on the road. We have a great selection of local parks, farm roads, and trails to enjoy in my county. Having disc brakes on the the cx bike makes those sessions on the mountain bike trails a bit more enjoyable because you don't have to strangle your brake levers to slow the bike on a descent. I spent fall days, ten years ago riding a cyclocross bike on mountain bike trails. Now being able to use less effort at the brake levers- modulating the brakes from the hoods versus the drops is a welcomed experience.

Sure, you can ride your mountain bike on the road and then shred some trails. For now I'd rather have the multihand positions of the 'cross bike handlebars than the mountain bike.

I swapped out the stock rubber on my bike for a set of Clement LAS tires. They're primarily a cyclocross race tire that's used on dry, grass courses with a file tread center profile and mild shoulder knobs for when you get into the loose stuff. In this case, for my terra-firma escapades, I pump up the tires to 65 psi. 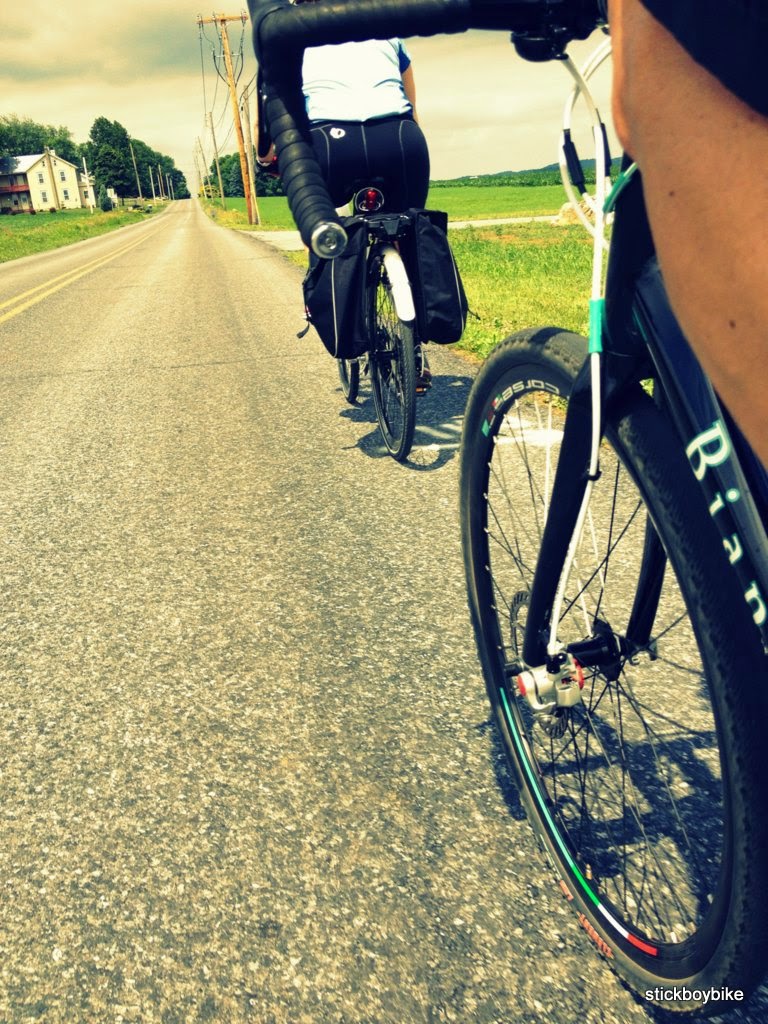 May day farmland cruise with Mrs. Bikewife on her new Bianchi Metropoli.


The beginning of July was my birthday. As every year, my mom wanted to meet up for lunch. So I planned a road ride on the Zurigo from my town, over the Susquehanna River into York County, linked up with the Heritage Rail Trail, then boogied on down the gravel trail to Mom's house. July is prime riding weather for us so I posted a message on the team FB group page asking for some company on the ride. Evans and Mealey met me in Hellam, swung around and we joined a few other guys in York City for the jaunt down the Heritage Rail Trail. 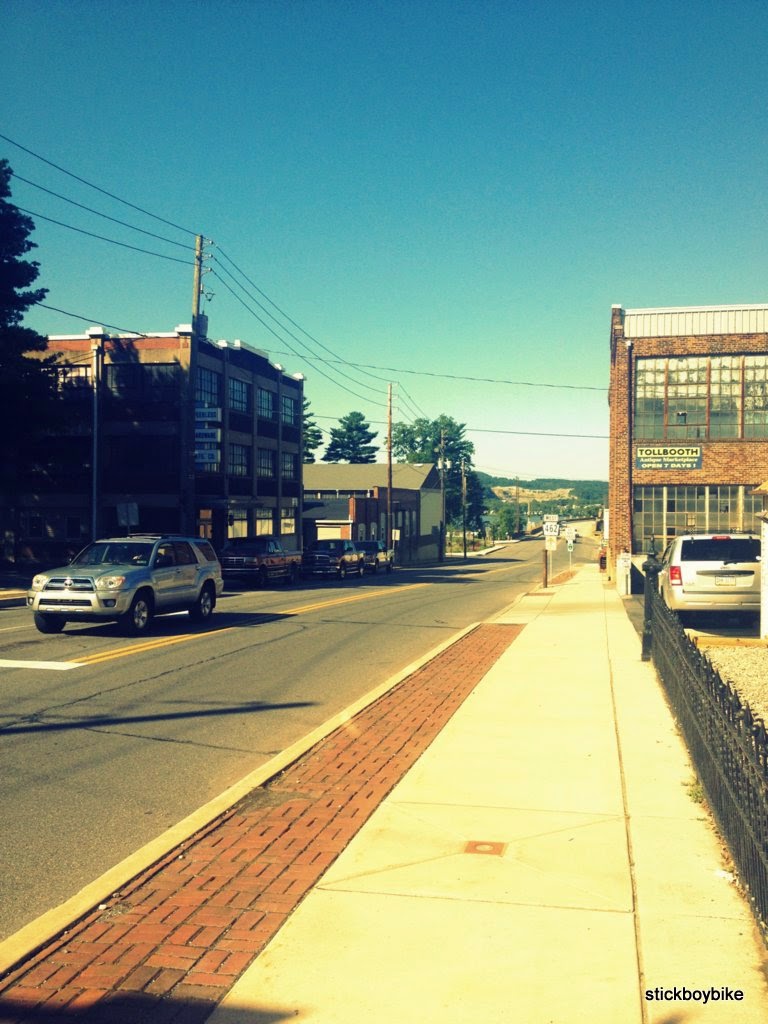 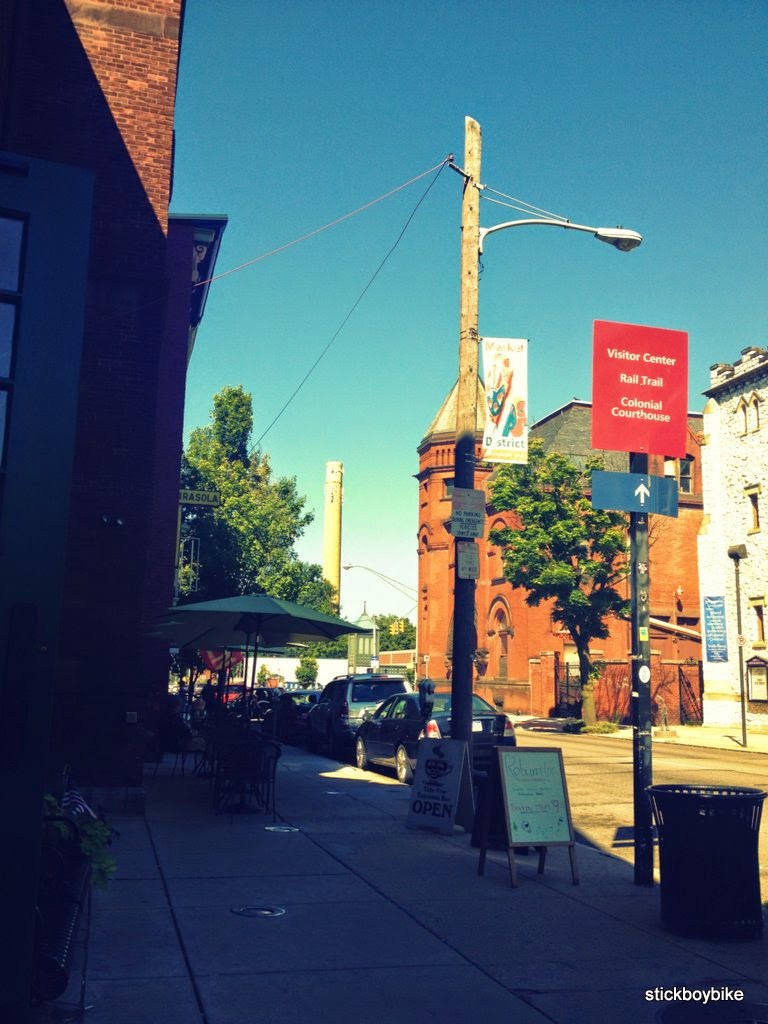 York Co. Central Market- meet up with fellow teammates to continue the ride. 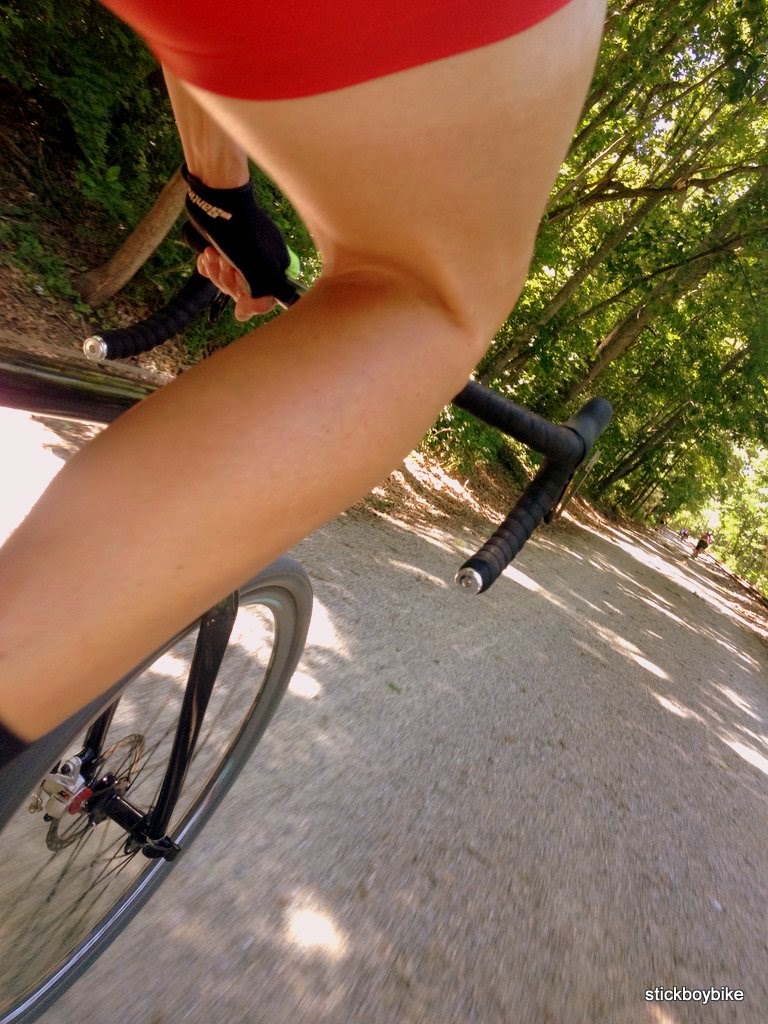 On the Heritage Trail- York, PA. 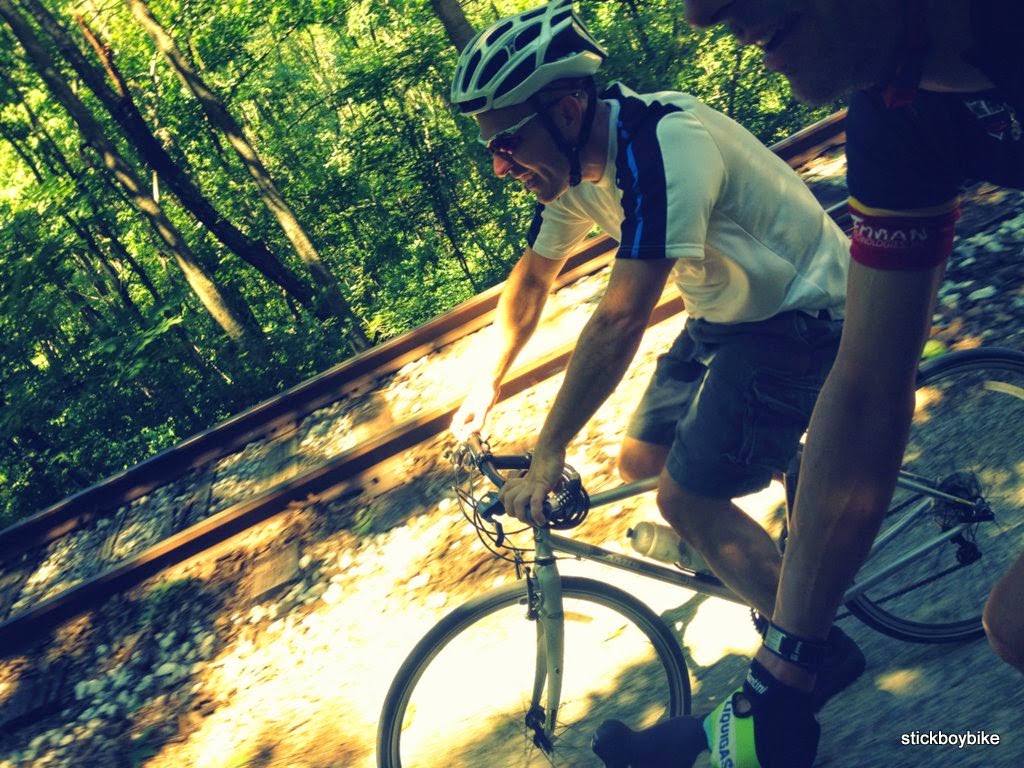 The crew peeled off before we reached Seven Valleys and I kept on towards my destination with the owner of Blind Spot Nutbutters. He is the source of the company's name and a sponsor of our race team. Troy is legally blind and can still ride a bike damn well. 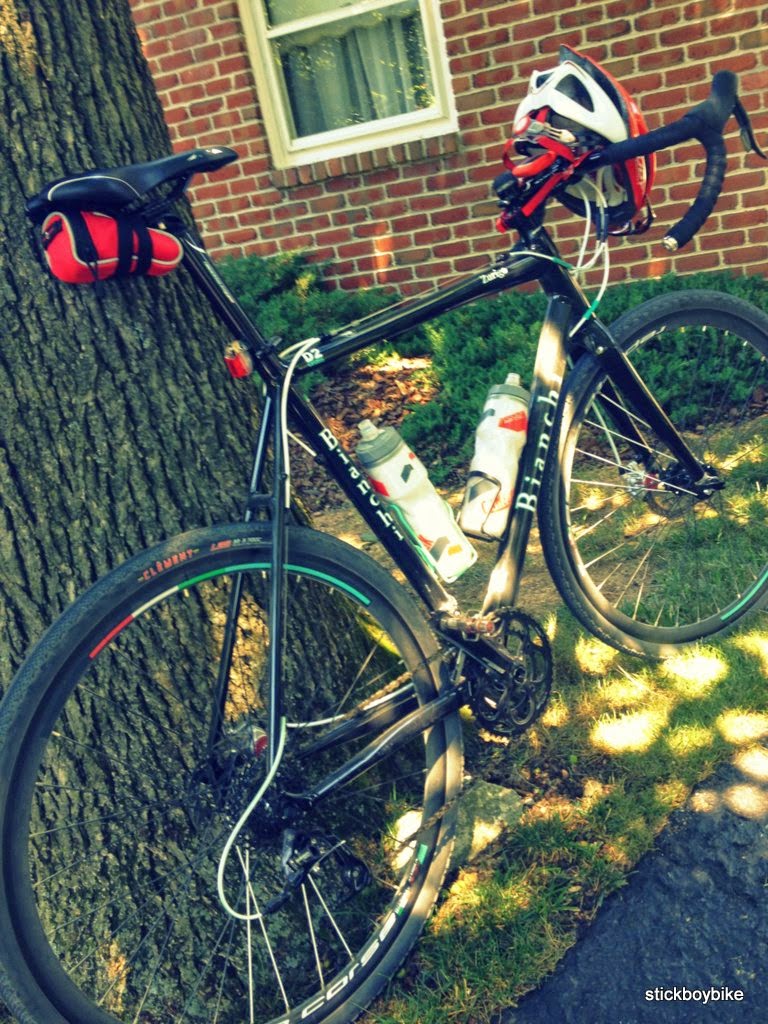 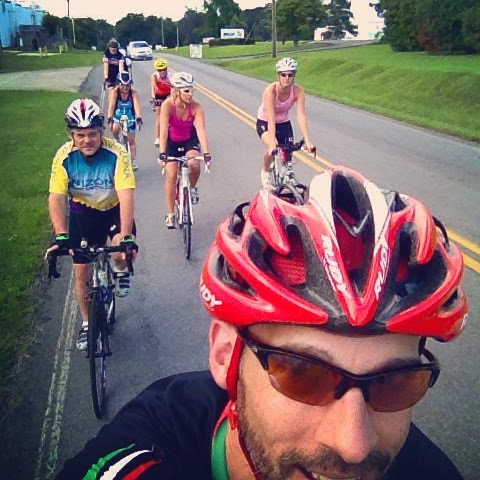 Rome, GA | Cycle Therapy Shop Ride!
I was on a stint in Rome, Georgia and jumped on a shop road ride with the folks of Cycle Therapy. The group was very welcoming to a new rider. Halfway through the ride, this woman riding behind me makes the remark in a deep southern drawl, "He has chubby tires on that bike." "Yes ma'am. 33mm wide!", I replied. I believe I was the first cyclist on a cx bike they've seen keep up with them on a their road bikes. 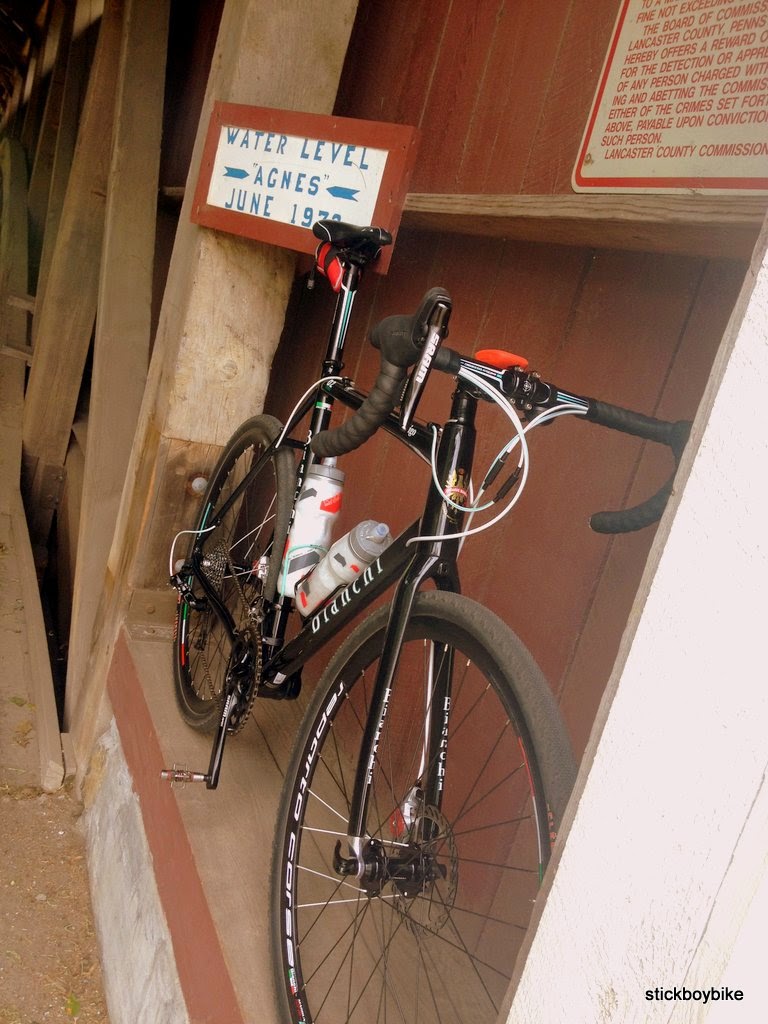 One of the many bridge crossings you'll ride through in Lancaster, PA. Looks like my saddle height is near flood level during hurricane Agnes.


The Zurigo Disc rides pretty damn good. The bike has a flex-free fork. Opinion mongers claim a disc brake equipped 'cross fork will pull your wheel off line if you feather the front brake through a corner. I have yet to experience that on this bike. I do know that the dropout of the fork has been design to resist the axle from being yanked out of the drop out by the braking forces at the hub. It feels solid. It's nice not having any fork chatter either under hard braking efforts.

The geometry feels very similar to my Bianchi Cavaria which I run a 130mm stem for racing. The stock Zurigo Disc stem is 120mm from this 61cm frame. I'm fine with it being shorter. It adds a bit of comfort to the ride.

Having been on SRAM Red for four years, I'm pampered by the quick upshifts and light overall groupset weight. I'm impressed with how well this generation of Apex shifts the chain. It feels smoother than the kits I built up four years ago. I'll attribute that to the better cable/housing from Jagwire.

The 11-32t cassette gives me plenty of range for getting up and over the climbs on the mtb trails and the PF30 crank is beefy. The bike sprints really well too.

Like many of my shops who sell loads of 'cross bikes as transportation/ commuter/ touring vehicles, I'm reminded if you had to buy only one bike, it's hard to beat the versatility of a 'cross bike. 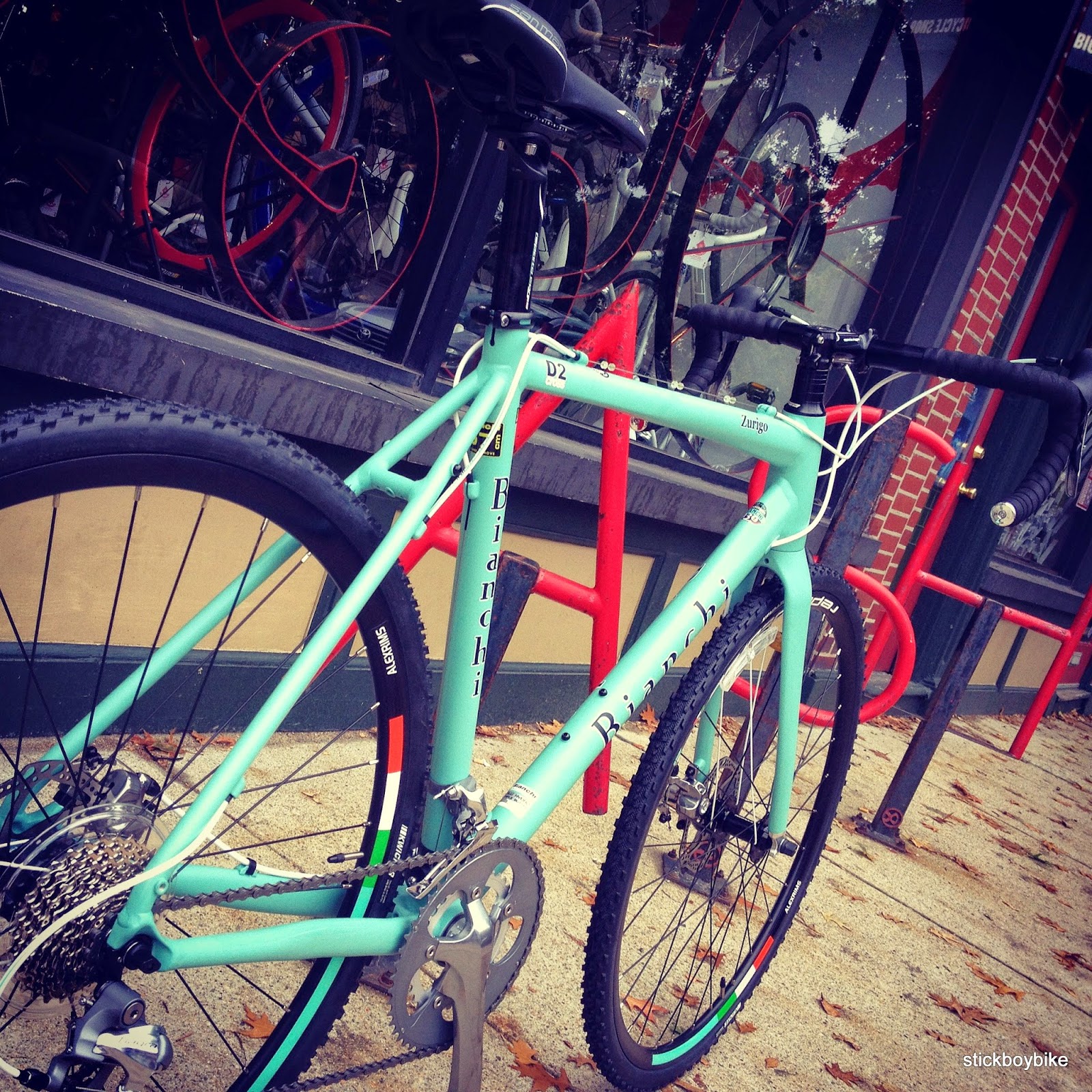 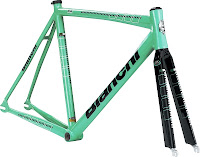