January 08, 2014
The Bianchi Impulso is my first aluminum road bike since riding the 2010 B4P 1885 during the summer of 2011. And yes, that's the same SRAM Red kit from back then that you see in the photos below. Time tested servicing and maintenance will go a long way towards extending the life of your build group. 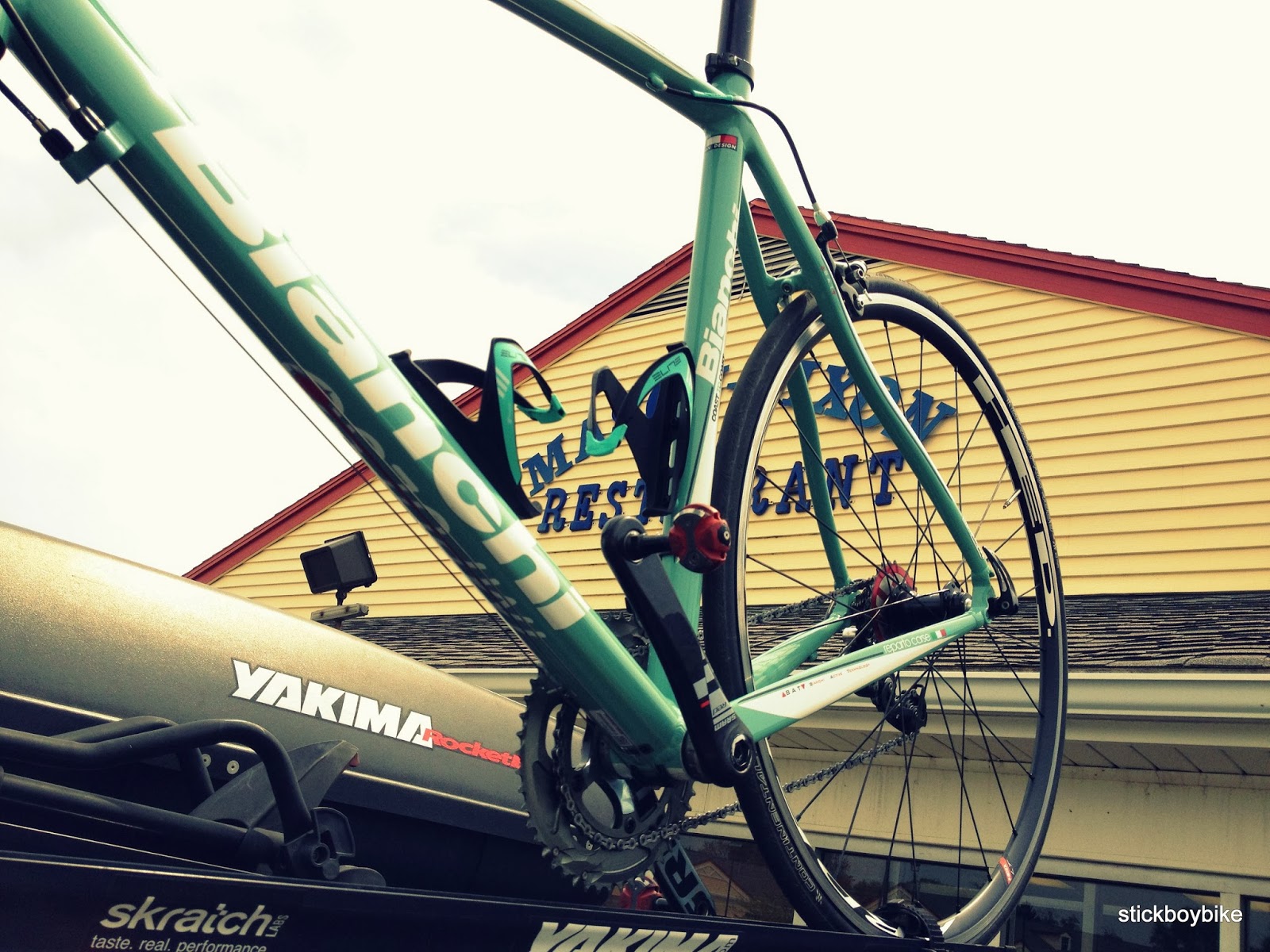 Meeting Mom for lunch as I make my way south to the Carolinas to see some important people. 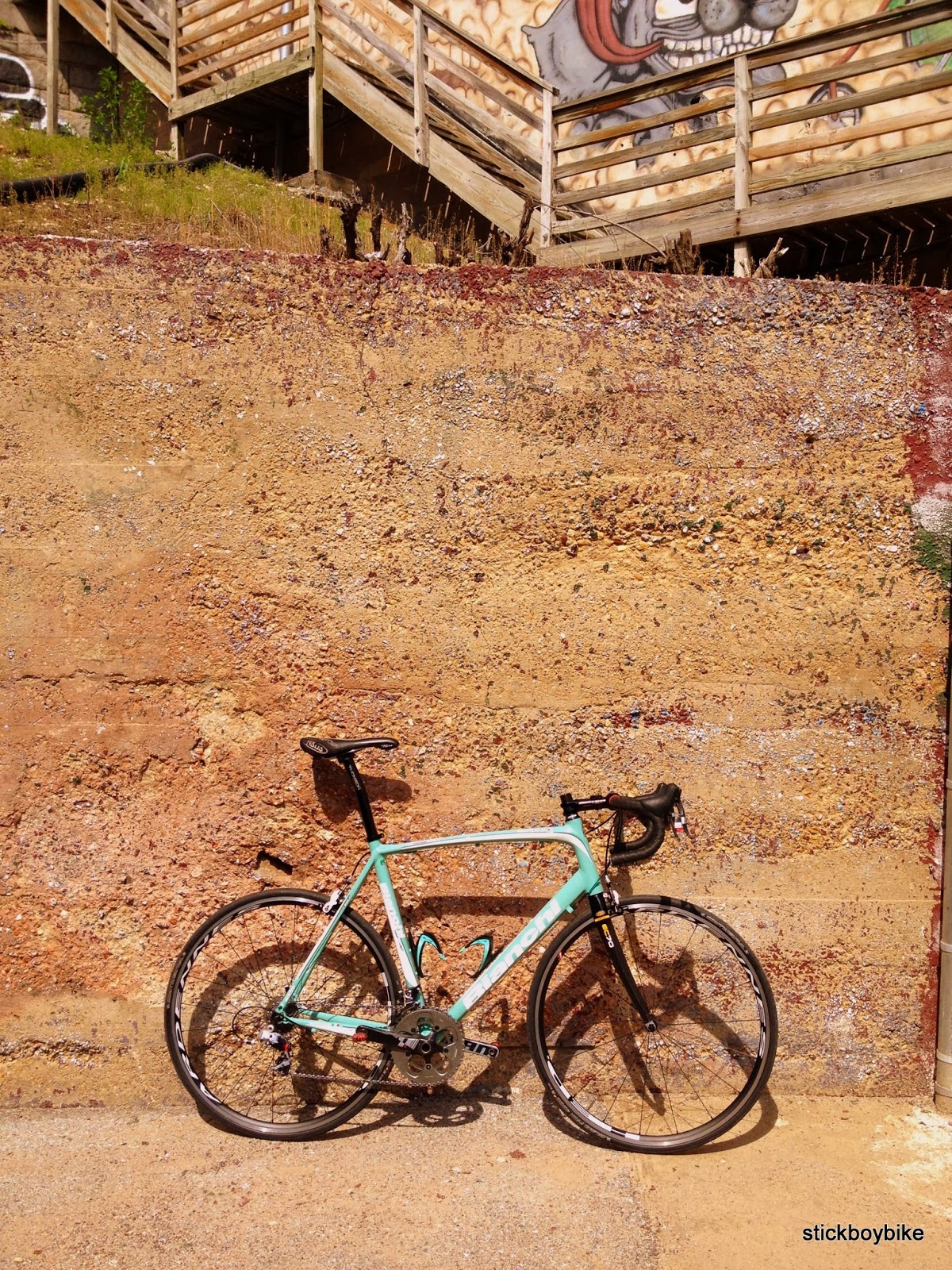 A random wall shot just outside of Baltimore Bicycle Works in Baltimore, Maryland. These guys are Baltimore's go-to dealer for all things celeste. 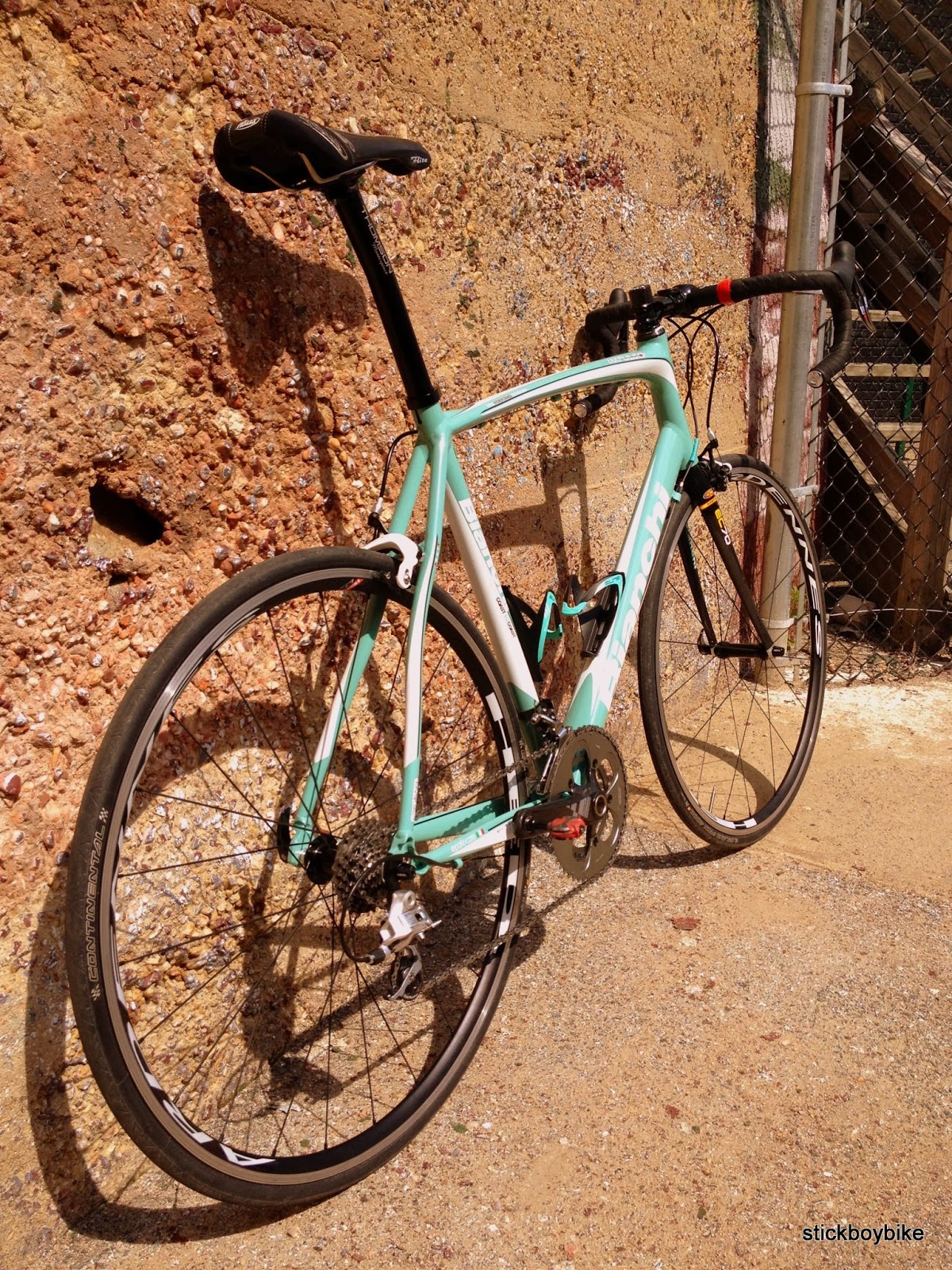 I call this the money shot. Being a photo-nerd, I feel this is the most flattering of angles in which to shoot any bicycle... granted it's not the latest outcropping of 29r mountain bikes where where the stem/bar height is the same level if not a bit higher than the positioned saddle height. How the heck do people hop logs when their bars are that high anyway? I that case, slamthatstem.com and snap a photo. 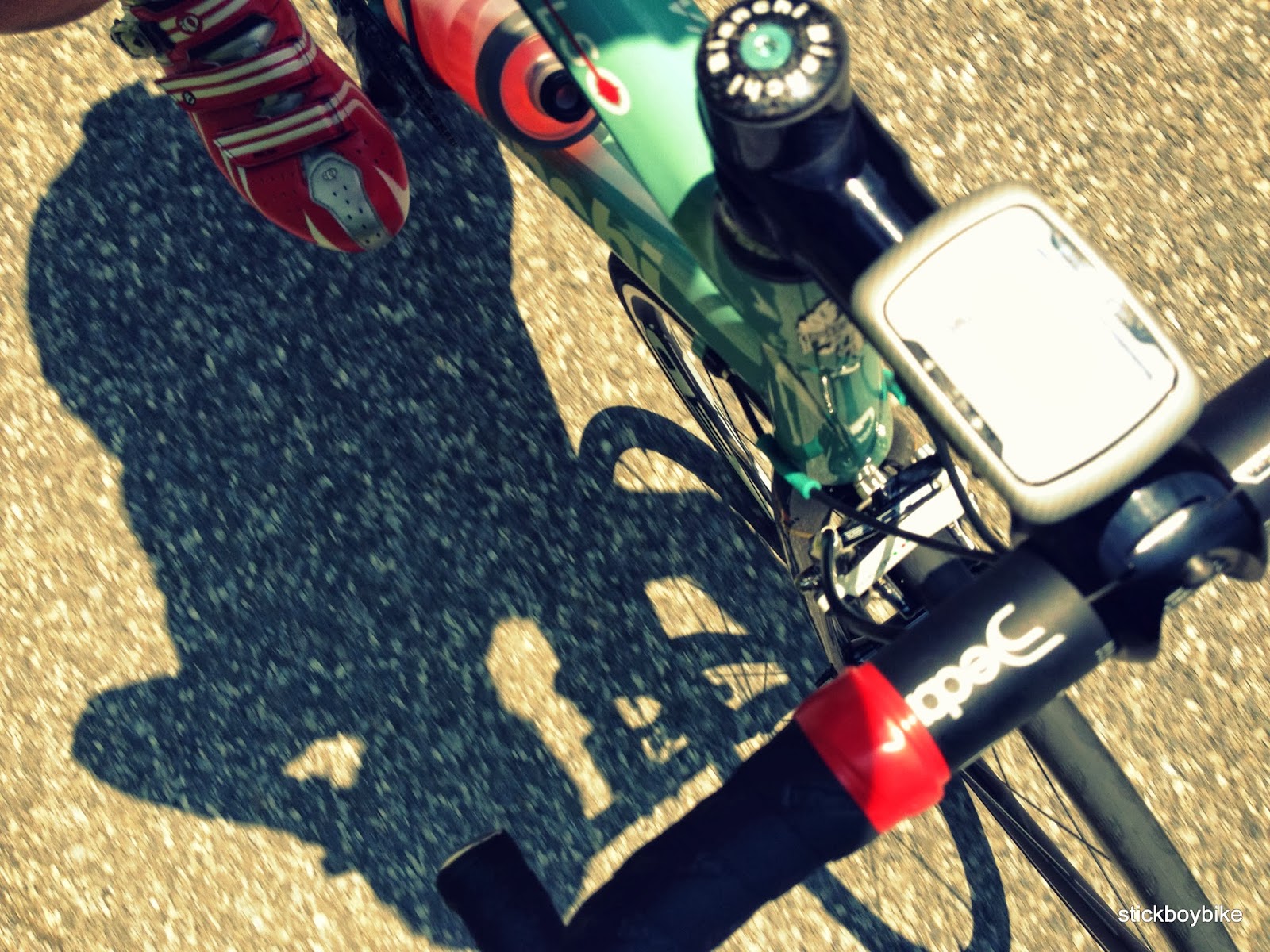 The working man's bike. Aluminum stem, bars and seatpost, HED Ardennes LT wheels. The only carbon on the bike are the brake levers, fork, crank arms and headset spacers.

Basically a crash proof bike which I found out after hitting the deck at 27 mph during a crit race this spring. I'm not sure the frame would have survived had it been carbon fiber. Choose your tools wisely people.

The C2C geometry of the Impulso, matched with the 43mm fork offset (vs the C2C stock 45mm offset) made for a really stable handling bike. Not as quick of steering as the Oltre, not needing to drive the bars through the turn like the Infinito and other C2C bikes; a nice blend. In beer terms, it like combining a stout and an IPA. Not too smokey and nutty, not too hoppy, just right like an Imperial Stout. 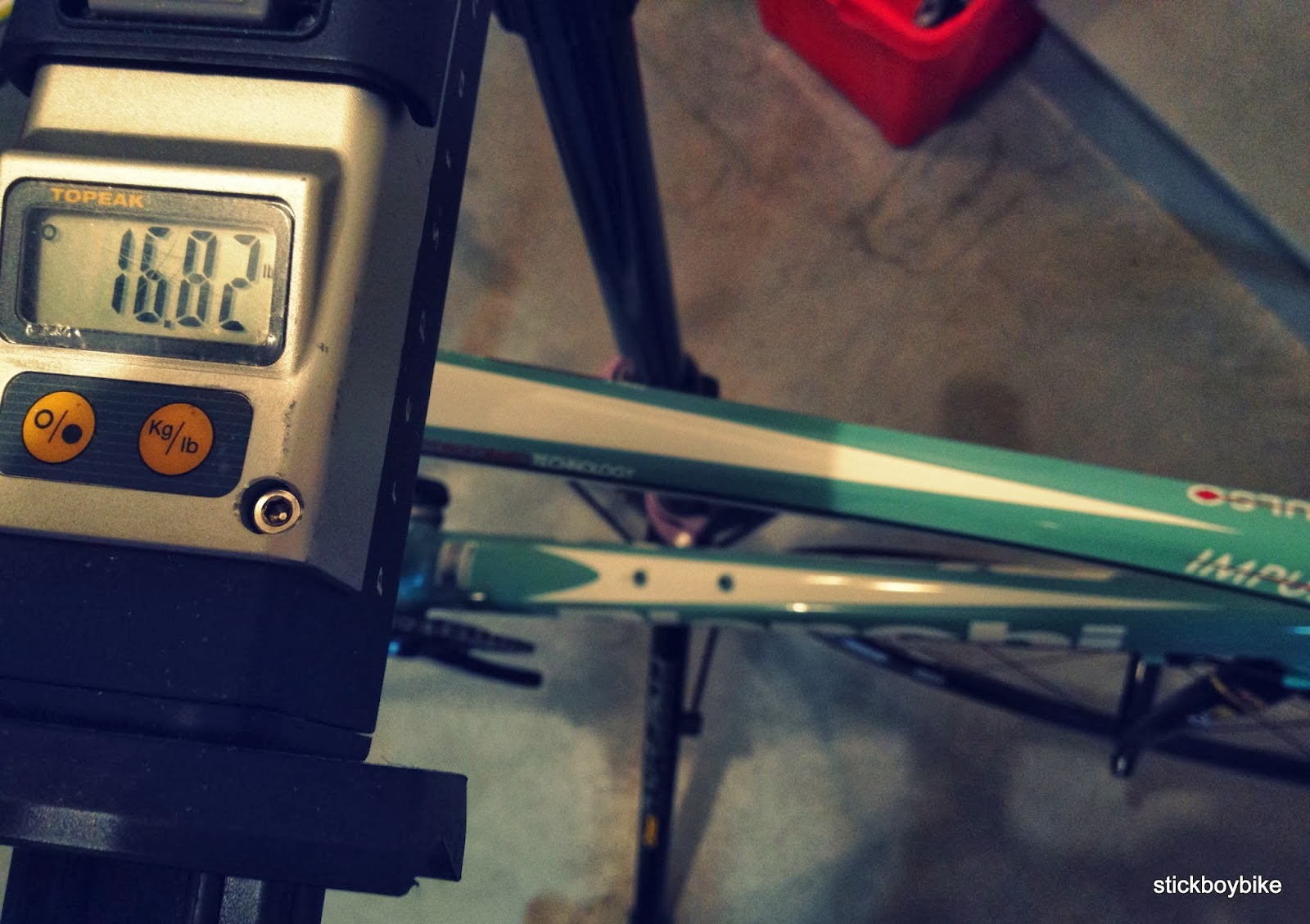 Why I love the Impulso.
Think for a minute. You can drop one pound of bike weight by upgrading to an Oltre frame, which these parts on this bike came from, and have to sink another almost $4k to have that frame. Is -1lbs worth it? Is having an Oltre worth it with that sort of a price jump? What do the Oltre and Impulso have in common with regards to racing?

Besides the different geometries on the Impulso and Oltre, both are Pro-Tour race frames. Really? The Impulso. Yes, the aluminum Impulso. You see, over in Italy, their frames have to pass CE testing standards. Here in the states, we have the CPSC which basically means that the bike must have reflectors on it at the time of sale and your stuff shouldn't break during use.

The bikes sold to dealers in the US are from the pages of Bianchi Italy's catalog-- at least they share frame sets as some components will vary from market to market. Which means that the bikes sold here are the bikes that Italy sells which comply with CE standards which are higher testing levels than what the US requires.

And because of the alignment with the outgoing Dutch Pro-Tour team, Vacansoleil, who loved to ride aluminum bikes during the Spring Classics, the Impulso had to be up to their Pro-Tour standards for strength and performance. An aluminum bike that can take a beating on the cobbles will surely withstand your club ride, weekend road race, or winter base mile session.

From what I can recall, there are NO teams during the spring classics riding an aluminum bike. I'd like to think that's because many bike manufactures wouldn't fathom handing their frames that are used on a $1499 Shimano 105 bikes over to a racer with Pro-Tour race schedule.

Confidence in this frame, yep. Thanks to Bianchi's Triple Hydroform technology. The head tube is hydroformed, then the top tube. The two tubes are then welded together and put back into a hydroforming mold, and hydroformed again. The weld behind the head tube disappears, giving the appearance of a monocoque design, much like a carbon frame. This process creates a strength rating for the front of the Impulso that exceeds 6 times the minimum CE testing requirement. So yes, you can pound the cobbles stone roads during Paris-Roubaix on the Impulso.

Here's the original entry for this build.--
Cycling rat rod for the weekend enthusiast.