April 22, 2013
This maintenance session is geared towards the SRAM GXP external bearing bottom bracket. I've been running the GXP bottom brackets since 2011 and have been really impressed by the ease of installation, and smoothness of the bearings after a few dozen rides after first installation.

Bottom brackets seem to be on the love/hate list of items that cyclist have to deal with during their lifetime in sport. The 'bb' remains out of sight, out of mind until their first warm weather ride and halfway up a climb, the clicking starts, typically at the 2 o'clock position in their crank stroke. You can either endure the noise or take it to your LBS and have them deal with it which could set you back $65 for a new BB and almost that much in labor.

At the end of the 2011 cyclocross season, I did my final bucket cleaning of the bike and then hung it up until the end of the winter. Around March 2012, I pulled the group off the Cavaria, minus the compact cx geared crank and swapped the parts onto the Oltre. The cx crank and GXP bb remained installed in the frame until I pulled the parts off the Oltre in September and got the Cavaria ready for the 2012 cx season.

By the time October was upon us, I noticed a grinding/clicking sound from the right crank arm as I came over the top of the pedal stroke. Cringing for the rest of the ride, I was reminded of my failure to service the bottom bracket at the end of 'cross season 2011. Later that week, I pulled the bb off the bike, popped the seal ring and the bearings resembled a greasy, rusty cocktail, surely exposing my lack of maintenance for this simple bike part. Luckily I had a backup SRAM GXP bottom bracket in the toolbox and was up and running by the next ride.

Hopefully this entry will speak to the at-home mechanic in all of us and get you thinking every fall... lemme pull the bottom bracket and service the bearings. We pick up the service work after the crank and bottom bracket have been already removed from the bicycle.

Back to the now.. 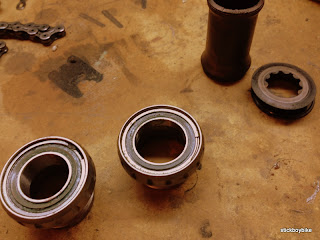 With the bottom bracket on the workbench, I get to work with my spray bottle of cleaner and mist all the parts and wipe them down. The cleaner is a 7:1 ratio of water to Simple Green. SG is strong stuff and this ratio allows it to be effective for cutting grease, yet mild enough to scrub the grime off white handlebar tape and scuff marks on the interior kick panels of my Honda Element. Be sure to do a thorough job wiping both sides of the bearing seals too. (stacked on top of each other, upper right corner of photo.) 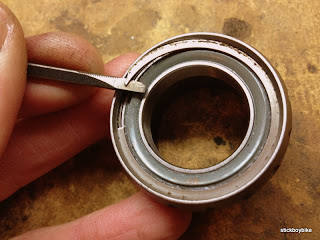 Use a small flathead screwdriver to gently pry up the clip that holds down the gutter seal ring. 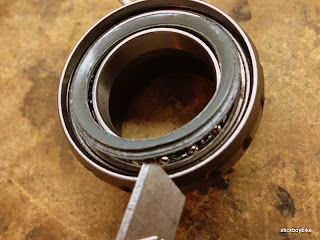 With a box cutter blade, creep in with the tip pointed towards the outside of the bearing, gently push the back, down and then towards the center/ inside diameter and lift up on the gutter seal ring. 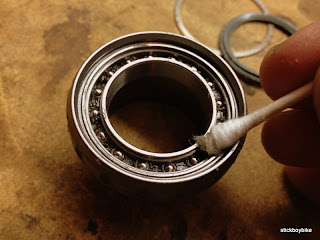 [I'll back pedal and mention that prior to removing the clip in the first step, I had a slight click from the bottom bracket coming from the drive side bearing.] With a Q-Tip, I'll take a few passes over the bearings to remove any scummy grease that may be lurking in the race. Surprisingly these bearings look a whole lot better than the ones I pulled apart (noise due to neglect) October 2012.

If you have an air compressor you can blast some of the grit out of the cups. Saturate the bearing cups with WD-40. Then, with the bearing cup on a rag, in your hand, blast out any grime with the compressed air. Just be sure to use the rag to catch the stuff that blows out the back of the cup. You may have to repeat this a couple of times to remove the dirt particles that are hidden in the race. It would be nice to have a machined aluminum jig to hold the bearing cup and inject new grease into the bearing. 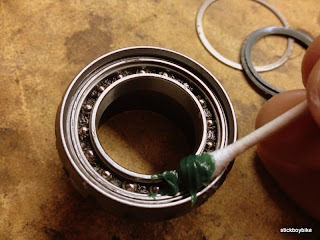 Using Park Tool grease, I dip the Q-Tip and apply the waterproof grease accordingly. Here, I'm working on applying a nice even layer across the top of the bearings as you'll see in the photo below. 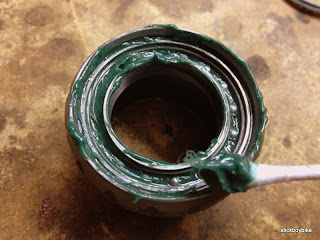 It's not pretty, that's what shop rags are for. I twist the greased Q-Tip between my fingers as to push the grease into the race as much as possible. 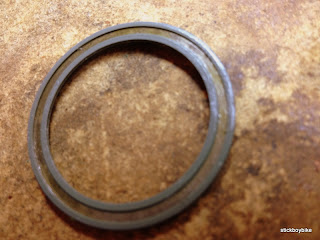 This is a photo of the back/ bottom surface of the SRAM GXP Gutter Seal ring. The track that is around the circumference of the ring acts like a retention trough for the grease; so don't be afraid to slather an ample amount of grease on the bearings before putting this guy back into place. 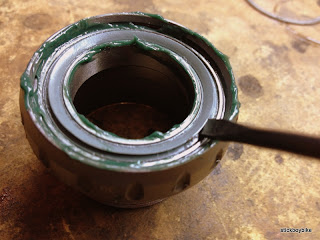 With the gutter seal ring in place, I carefully use a flat blade screwdriver to press the edge of the ring into place. Do this around the entire ring, you should notice it 'snapping' into place. Not so much making a snapping sound but by feel with your tool, will notice it confidently locating down into the bearing cup. NOTE: The tip of the tool is below the gutter seal lip. Be sure to not press the lip. Damage to this lip will reduce the sealing ring ability to keep out water and dirt during use. 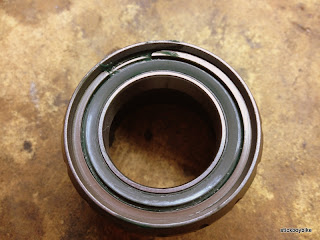 The gutter seal is in place, the clip is snapped back into the cup's groove and I've wiped off most the excess grease. 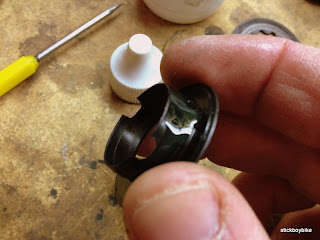 Final step, the non-drive side dust cover gets a layer of Phil's Tenacious Lube upon assembly.

Install the bottom bracket and crank assembly according to factory procedures and tightening specifications and then go put on some miles!