'Cross season is well under way in the USA. MARBRA Super8 Series has been getting plenty of action from all and last weekend's rain soaked race in Hyattsville, MD prompted me to do an entry on 'cross bike maintence.

Servicing your bike is an important job for any cyclist. I know, 'job' sounds like something you should loath but seriously folks, taking 45-60 minutes, to clean the bike could be the best thing to do besides eating a Nutella covered waffle and downing a doppio before your next training race.

How often you service or clean your bike depends on your level of OCD, some of which I've throttled back on until recently when I moved to the eastern part of the county. Now I'm located near more farmlands and corn fields so the fact that every rainy/wet ride I do the road , leaves the bike with a wet film of cow poo from field run-off, has caused me to up my frequency of cleaning.

I love my Pedro Pro Brush Kit. It contains a nice selection of brushes, all varying in bristly stiffness for the various areas of the bike. In addition, my portable work stand happens to be their Folding Repair Stand. These useful items have been in my garage since the last bike shop I worked and have been super durable for the past 5 years. 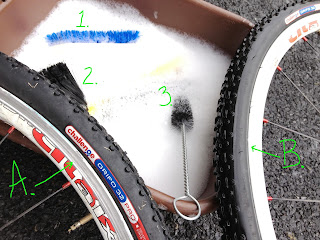 With the Cavaria in the workstand, I'll pop off the wheels and set them aside. The Brush Kit has a large soft bristle brush (#2 in left photo), the biggest one in the bag which I'll use with a bucket of soapy (use dish or car soap) water, to clean the bike frame. This brush will reduce the chances of scratching you paint job. After repeatedly dipping and brushing the dirt off the frame, I'll use the garden hose to spray the soap off the frame, using a light spray pressure, not the turbo blast setting, don't soak the headset or bottom bracket bearing area. You don't want to push dirt into those areas.

After the frame is rinsed I'll grab the corn cob shaped Pedros brush (#3 in above photo) and give attention to the brakes and drive train of the 'cross bike. Brushing away the mud and dirt that's accumulated around the brakes, post mounts, front and rear derailleur/ jockey pulleys, handlebar/cable routing area in front and below the stem. Don't forget a good soapy brushing under the saddle since we don't run mudflaps on our bikes, ha! Rinse those areas with the same mild water pressure as you used earlier on the frame.

Next, the wheels. This cleaning I'll do because I like to remove the residual junk that builds up on the braking surface (item A above photo) of the rims as well as the dirt/mud between the knobbies on the tread. Keeping your tread cleared of dried mud is a habit I got into doing from way back in my radio controled car racing days where we raced on clay tracks and the clay was very stubborn and often didn't clean itself from the tread during use alone.

Using a 2"x4" brush (#1 in above photo), I'll scrub the crown of the tire as well as the side of the wheel/ braking surface and tire side wall. The Challenge Grifo tires have a nice supple casing and clear themselves nicely of mud during the race and clean up nice post race. After the brushing, I'll use the #2 brush and brush between the spokes and finish with the #3 brush around the hubs and get out the remaining grass that's hanging out near the hub/spoke junction. Then rinse with a light spray. Clean! (B wheel above photo)

Using an old bath towel, I'll wipe down the wheels and the bike. This step is where you use an keen eye and as you wipe, inspect the wheels and frame for a possible cracks or anything that looks like it doesn't belong.

Once the bike is wiped down, install the wheels and dry the chain with a shop rag. I'll use the air compressor to blast out accumulating water round the faceplate of the stem, derailleurs, cable bosses, brake bosses. After all that depending on the cleanliness of your chain regarding dirt contaminents, I'll back pedal the chain and grip it with a dry rag, again, and finish with an application of ProGold lube on the chain's roller bearings. (Chain-L for summertime, ProGold for 'cross) If there is any left grass around the derailleurs, cassette or the now existing 'dirt ring' around your jockey pulleys, I'll use a dental pick and a tooth brush to remove that extra mess.

Let the chain sit with the lube/oil on it for ten minutes and wipe off the excess with a rag. If you are doing this service after a cx race and you have a training ride on the 'cross bike the following day or two with your road tires, I'd wipe down the chain again after your next ride. This following ride session will push out any dirt particles that may be residing in the chain's bearings which can be removed from the surface of the chain with another wipe down using a clean shop rag.

Go over your shifting and braking, adjust as necessary.

The takeaway, clean the bike for safety sake, clean the wheels for corning sake, service the chain to reduce the chances of snapping a chain mid-race or prematurly wearing down your cassette and chain rings.