Get lost on all your rides.

Yes this is a metaphor and no I do not wish for all of you to get lost and not find your way back home. Rather on the days of training or heck, even social pace rides, step outside of your box, your comfort zone, your mental Snuggie and take that road you constantly pass and dismiss because you feel it's 'not part of THIS ride' today.

A few months ago I moved to the eastern side of central Lancaster County, further away from my bike training 'hamster wheel' called Turkey Hill. I spent the good part of last spring and summer drilling intervals on Turkey Hill hoping to get my butt in shape for 2011 race season.

Still suffering from separation anxiety from the old pain cave, I decided last Sunday to HTFU and pay a visit to that riding area. The conditions for yesterday's ride proved favorable. To do so, I needed to leave my new residence and start playing left turn, right turn, once I got through Lancaster Central Park. And with the iPhone in the jersey pocket, just.in.case...I needed a map. Route map? meh. 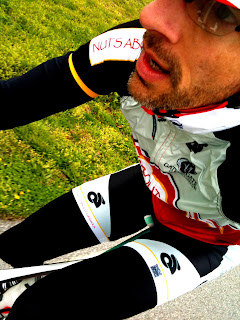 The break-in ride for the new kit; jersey, bib shorts and vest.

For local cyclists who have ridden the 'Round the River Ride, know that River Road is a main route along the Susquehanna River, if you make a wrong turn while heading southwest and make more right turns than left, below the city, you'll hit River Road. Head north on it, and you're back up towards SR462; you'll have your bearings then.

I made my way under the bottom of the park and kept my nose heading SW as good as I could. This was like a whole new state I was riding in, roads just meandering like cattle in the field. Farms littered across acres of land only to have one car every 20 minutes pass me.

Punchy climbs which were accented with loads of high speed carving descents above wandering creeks; breathing in the cold air that rushes up to my face when rounding the waterways only to be met with the break of sun out of the trees. Followd by the spiking of temperatures for an out of saddle effort to the next stop sign. I was in heaven and apparently maturing for my age to forgo the same old structured riding route.

Half way through the ride, I did come across an old steel bridge that I remembered from a ride I did back in 1998. It's pretty hard to forget this bridge crossing because it has a steep lead up to the entrance of it. 14 years later, the route comes back to me and I decide to make my way back home, heading first towards Millersville for a refill of the bottles.

Call it ADD or lack of focus, I have this warped ability to enjoy the scenery around me during the hardest of rides. Mind you this is only when riding by myself, in paceline, I'm looking at the middle of your back but none the less, I mentally get 'lost' in the spiderweb construction of Lancaster rural roads. So much that I saw many an inviting lane and made an unintended turn down it, wondering where it would take me.

When this happens, there is no regard for how many energy bars are remaining in the jersey pocket, nor the amount of mojo juice in the water bottles; just go, take that road and see where it leads you. Because of this, I'm reminded of a conversation I sat in on during my time as a mechanic at Gung Ho Bikes. Hearing Jay and Jonathan Gantz talk about a solo training ride John was on. He made a wrong turn, ended up adding another hour onto his ride and running out of fluids and food. To paraphrase Jay's acknowledgment of John's bad navigational skills, 'It's rides like that which harden the soul and body, survival, not for your life but to make it to the end."


Stepping out of my box felt good on Sunday, maybe because John would have done the same too...