After a year of use, you should do some light servicing to your Double Tap shifters. Here's a brief tutorial on servicing the 2011 SRAM Red shifters. 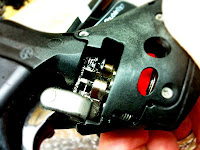 I peaked inside of the shifters to see how the grease was holding up from the factory. Most of the grease was gone on the rear shifter assembly, the front had less than 50% from what I could tell. In addition, I discovered black shavings have contaminated the gear mechanism, the worst of it being at the rear ergo since that one gets the most use

When changing gears the Double Tap paddle rubs against the inside of the hood cover and is slightly exasperated by the fact that your thumb wraps around the ergo body, providing resistance against the paddle movement. I'm sure if you shifted from only the drops, the amount rubber 'shavings' would have been minimal if any.

Peel back the hood over at the top of the shifter, spray a few shots of denatured alcohol on the expose shifter body, then before it dries, quickly, peal off the hood cover, starting at the base of the shifter first. The alcohol acts a lubricant for removing the hood and dries leaving no residue. 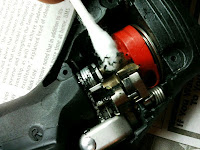 With a handful of Q-tips on the work bench, I carefully swabbed out the shifter mechanisms, shifting occasionally through the gears from high to low and back again, to ensure there were no more shavings hiding on the mechanisms.

My hood covers are pretty worn so I'll be installing new covers and proactively smearing a skim of water proof grease on the inside of the hood after initial installation. I anticipate this skim of grease will reduce if not prevent, the shaving away of rubber during shifter use.
Labels: double tap service red shifter failure sram SRAM Double Tap sram red sram shifter failure