I shook my head this week at the fact of some things, items, etc, fall through the cracks of my In-Bin. (old reference to the In and Out bin on the corner of some office worker's desk. Inbox is too tech for this example.) Namely, the pile of business cards I've been shuffling through since my return from the 2010 Interbike show. Yeah, I had that big of a pile of cards!

Like eating around my plate at dinnertime as instructed by mom when I was little, I got to the bottom of the mound of mashed potatoes, only find a business card from the guys at TRAFIK Pictures. Tim and Ace came by the booth at Interbike 2009. Ace had his Pista Concept with him and if you scroll down on the page I linked above, you'll see his black ride. 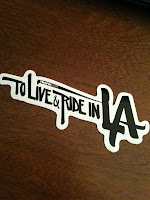 When Tim and Rick stopped by Interbike last month, I was like, Hey! How was your movie you did last year? (having no concept of time) Tim informed me that they just finished it up. Whoa, time slipped by me. But in the same sense, you can't rush a good production. Check the trailer below for their new joint, 'To Live and Ride in LA'.

To Live & Ride In L.A. OFFICIAL TRAILER from TRAFIK on Vimeo.

I'm impressed they got some airtime in a helicopter for this production!

The teaser looks good guys and I'm sure there's a Pista Concept among the masses in the video.