My travels for the first week of November brought me to Nashville, TN. I was paying a visit to see Lynn and his crew at Gran Fondo Cycles. Oh ya, and sneak in some pedaling time as well!

After hanging out for the better part of the morning, talking bike with Lynn, Britton, Jeff, Jay and Clayton, my loaner bike was finally finished with all of its needed repairs. Not that the bike was in bad shape, rather it needed some TLC like shifter cables and a new chain. Clayton installed my Speedplay pedals and I kitted up. 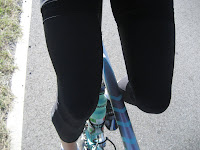 The temperatures were in the 50s so out came my knee warmers. 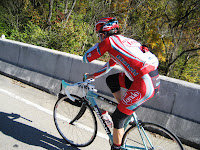 With Lynn as my tour guide, we rolled out into what could be described as terrain that looks very much like back home; Lancaster, PA. Traveling in a northwest direction we snaked along the back roads, leaving the bustle of Nashville traffic. I was surprise by how quickly we were away from traffic and situated amongst the changing leaves of Tennessee. Quickly as in faster than what you could probably accomplish in Charlotte, NC; another great riding spot. 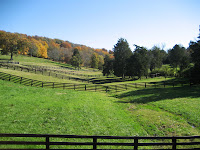 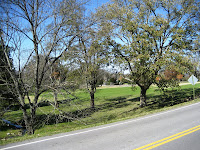 The other side of the road. Loads of fenced in farmland, massive houses. 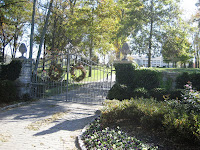 This estate belongs to country music star, Alan Jackson. His home is for sale...one of his many homes. Down the road from here is a former home of Amy Grant. Talk about needing a map to the stars homes, oh wait, that's what Lynn is for! 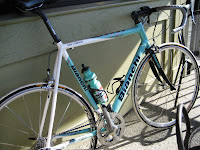 So the burning question is what fabulous celeste bike did I ride? Answer: 2006 San Lorenzo. Without turning this post into a flaming bike review...well, ok here it goes.

I've been on carbon bikes for sometime now. And it's obvious that carbon road bikes are in all the magazines, reviews, under tons of bike teams but every once and awhile there is a bike that wakes you up. Wakes you up as in reminds you of what a communicative handling bike should be like. Carbon road bikes are fabulous for their overall low weight but make a frame out of full Scandium and now you have a bike that speaks to you and weighs within a pound of a carbon equivalently spec'd bike.

The handling of the Scandium San Lorenzo was stellar! The bike has better steering response than the carbon bikes that I've ridden so far. Not to say carbon bikes handle like a turtle when changing your trajectory; but rather a giga-milli-nano second quicker steering response on the Sc frame. And cornering, yeah, faster tracking around the turns when you dump your outside pedal and lean into the corner. You can almost steer the bike slightly with your butt and less with the bars.

The ride quality wasn't harsh either. I rode a 61cm frame; the tubing is longer and has a bit more compliance than the common 53cm or 55cm frame sizes. Hopefully Lynn or Jay will let me know when it's up for sale... 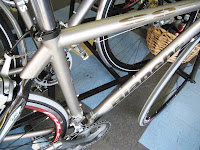 Bike coolness. A 2008 S9 Matta Ti. Grouppo- 2010 Shimano Ultegra 6700. The amazing this about this build is how there are 2 production years between the frame and grouppo. The matte finish on the crank, brakes and derailleur match wonderfully. Lynn has a good eye for details like this; frame, kit overal build of the bike is killer. Another reason why your next custom build should be done by GFC! 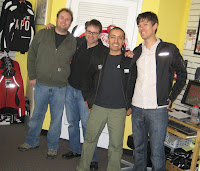