A weekend in the shadows of the Philly Pro Race.

One of my greatest beliefs with any job or any passion is that you should never take more than you give. With that in mind, I latched onto the BMW-Bianchi Elite Team for the weekend of the 2009 TD Bank Philadelphia International Cycling Championship.

Hailing from the southern end of the Mid-Atlantic region, I met up with the team the day before the race at The Bicycle Stable in Philadelphia, Pa. The shop was to be used as a departure point for what would shape up to be a Recon Race Course Ride, led by 2-time US Olympian Jame Carney. Jame is also Erica Allar's cycling coach- Erica has just joined the team near the end of last month. 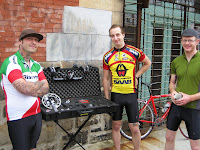 (l-r) Chris, Kevin and Derek. The guys that keep Chaz of The Bicycle Stable sane through the week. Notice in the background over Derek's shoulder that the front door to the shop is painted celeste green. That's devotion!

Two things worth mentioning about the SRAMs new Force grouppo is the ease of shifter mechanism replacement and it's value to the performance road bike market. The internals can be removed with two simple pieces of hardware, all while the shifter is still attached to the handlebar. The gear mech slides out and a new one slides back into it's place. Secondly, the new Force kit will give you a sub-2k gram grouppo at a grand less than the new Dura-Ace 7900. Yes, a grand less. Those savings will allow you to buy those Carbon 50s you've wanted for race day. 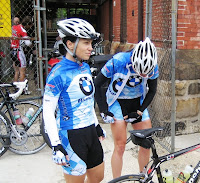 Dana and Erica waiting to leave. I believe that Erica is practicing 'Two John-ic Law' and verifying that the elastic on her cycling shorts isn't flipped up on her legs. Good job Erica! 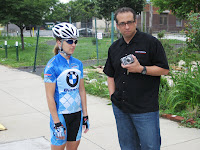 The creators of the BMW-Bianchi Elite Team, Laura Weislo and Dana Carson. Dana is now with Hutchinson Tires and provides the team with product for the race course.

note: Dana has been gracious enough to hook me up with a set of Hutchinson Intensives (230gr training/race tire) and a pair of Hutchinson Fusion 2 Ultra tires. I've been logging miles on the Intensives and have now been converted from Continental. The Intensive's 'Moto GP' casing profile have great top end speed and offer great flat protection on long road rides. It's sidewall is reinforced with a rubber that is used on Hutchinson's MTB tires; sidewall slice protection without sacrificing casing suppleness. More on the tires later! 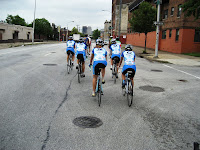 So, after introductions, hand shakes, oogling and potty breaks, we clipped in and rolled out with the owner of the Bicycle Stable, Chaz and his 3 partners in crime, the Team and myself. En route' to meet Jame and the rest of the racers for the Recon Ride. 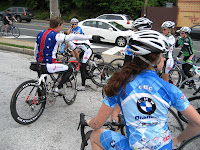 In the US Olympian jersey, Jame Carney discusses the course and what lies in store for those racing on Sunday. He has done this event numerous times and is aware of every section that may pose as a struggle for those that will be competing for top positioning during this 25 year old race. Kirsten Davis in the foreground, listening to Jame's advice and strategy. 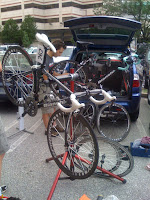 After pre-riding the course, I helped Emory and JK clean and prep the bikes for Sunday's event. Carbon pads were switched out, race hoops installed and final shinning of the bikes was performed. 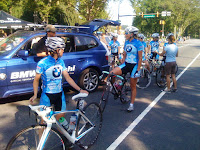 The women's field was riding as if passing the Men's Field was a preem. In fact, the ladies did catch and pass the men. With this blistering pass, the field was torn apart after Lap 2. Some racers were pulled, IMOP, way too early. Either way, the ladies gave it their best. Erica and her guest teammate made across in the third group.

I really enjoyed working the feed zone and seeing the race unfold throughout the morning. A big thanks again to the Team and all their sponsors. I'll see you at the West Chester Twilight Crit in July! 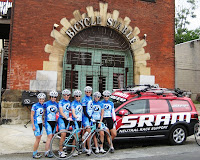