One more time. It could be many times and I would insist on returning to the Sonar Club to see Rollins do his Spoken Words show. Hugh and I returned for another lesson from the great Think Tank of this era.

With the end of a presidency that many wish to forget, Hank keep his material for the course of 3 hours...not bashing Bush. Rollins covered some of GW's flaws during the last hour but most of the content in which he talked about was the question, 'What is freedom to you?'... as in all the similarly phrased bumper stickers we see plastered on the rear of pickup trucks, SUVs or poorly kept Pontiac Grand Ams. 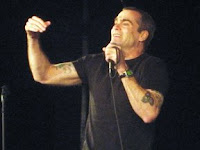 The definition of freedom sometimes isn't always defined by the second amendment or the ability to practice your religion free from persecution. Rather, Rollins went on to weave the tale of his worldly travels; visiting Beruit and Pakistan. In these countries where tensions are intense and protests, in the streets regarding an elected official's assassination, are grossly exaggerated on the US news as being riots...freedom to those countries is being to assemble and grieve over the lost one, burn some tires in the town square, chant outside the Mosque, and leave. Protesters just have to get it out of their system. If Americans traveled to other countries more often and realized that we aren't the only ones in the world and saw the conditions that some people lived within, freedom would be better defined in the American's minds.

Of course the night didn't go unspoken without touching upon Rollins music history. Covering the days in the beginning of admiring the smoking hot licks of Ted Nugent, realizing The Nuge wasn't all that, hearing Van Halen kill Steady Teddy at their first concert in the days of Arena Rock, converting to the Ramones with Ian McKay, and shaping the sounds of Black Flag so listeners would want to break s!*t for no reason at all just by listening to this young Washington, DC native.