It has been a little while since I've seen a show. Hugh and I made the trek to Washington D.C. to see the Rollins Band and X play. We had been to Baltimore to see Hank's spoken word show; 25 Years of Bullshit tour but for me this is my first witnessing of the band.

Henry came on stage with the usual show wardrobe, black shorts. A big piece of carpet at center stage for his bare feet to grapple as he delivered the highest intensity of verbal execution that I've seen of any singer. 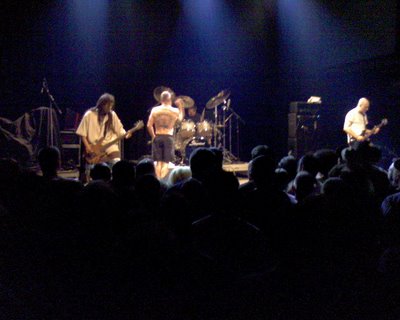 Lyrically over the years , Rollins has woven songs that give you the impression that trust and betrayal are smeared like bugs on your windshield as you travel through this life. The political side of Hank has turned even more sour with the current administration's warping of middle eastern interactions, national truths and plainly stated 'white linen dinner napkins, stuffed in their mouths to gag their screams as they are slaughtered in front of their families...'. 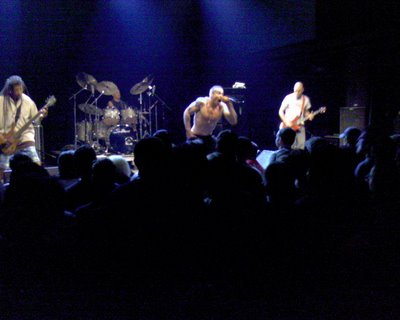 One thing that occured to me during this powerful perfomance is the guitar influence this band has had on bands like Primus and guitarist Tom Morelo(RAM & Audioslave). Chord structure, leads and rythms slamming back with the drums. Rollins delivers the every song with massive emotion, strength, serious focus and a touch of a charging bull. To listen to the cds is fine, to see and hear the songs live is completion of the Rollins Band mission; coming at you, not yielding, get the hell out of the way.

Anonymous said…
Kewl! Did you take those pix with your camera? They look great. I especially like the 2nd one how you captured him screaming in2 the mic. That reinforced your words.