September 18, 2005
I was looking forward to posting the bits on the Rollin's spoken word show that I saw this Friday. Instead in respect for an old friend that is no longer with us, I will tell of last Friday night sometime this week.

The friend that I speak of today lost his life one year ago to this date. Jon was a fellow rider and employee of a former bicycle shop that I wrenched at. I will tell of some good memories in this post. Some are tid bits of memories that I still hold dear to my heart.

I had first met Jon on a group moutainbike ride at Lake Redman circa 1994. I was on a KHS Montana Pro that I had bought that year from the shop he worked at. My first real bike, first real bike purchase, first bike with full XT and with a Rock Shox. Enough about the bike. I think Jon was about 14. I do know that he wasn't old enough to drive 'cause his dad dropped him off driving a 2wd S-10 pick up. Jon was riding a GT LTS. Some of you may remember this full suspension bike, some not. It was probably the best f/s frame that GT had made. Better than the I-Drive pig of a bike. I continued that summer to run into Jon on the local rides. On a stretch of double track that funneled into singletrack, Jon hauled by me on his LTS. I recall looking down at that moment and seeing the rear of the bike and it's shock soaking up the bumps. Thinking, man I need a full suspension bike, I purchased one the following summer. Impressionalable, yea a bit at the time...

Racing at Caledonia, Jon was in the Junior Expert class. Lungs and legs. I wandered over to the gathering of racers for the LBS that I bought the KHS from, to say hello after the race. Jon was sitting on the ground with the rest. Coughing like a cat trying to expell a hairball, he had obviously sucked in a lot of hot summer dirt pushing the limits of bike and body. The owner of the shop turns to him and says, 'Just yak and get it over with...' funny.

For how quiet of a guy Jon was, he had a solid level of drive and support for his friends and fellow riders during 24 hr races, local races and group rides; great encouragement. He was one hell of a wrench in the shop too. He tought me how to true my first wheel. Conversation with him was never short of dull regarding cars. Jon's love for performance stretched into automobiles. He had a white Integra GS-R circa '99. I remember it got pelted in hail storm one year out in West York. That car began a period of autocrossing. After that white Acura came a beautiful yellow Integra Type-R. Super tight! Aftermarket rubber for added grip (stock wheels were too nice to ditch) coil over shocks, aftermarket header. One quick whip. He autocrossed that one too. Better results of course, the limit slip in the front of that had to have been a HUGE help... Every year I would extend an invite to him to come to Wellsboro for the SCCA Pro Rally. Unfortunatly that race usually fell on a weekend of bike racing for him. 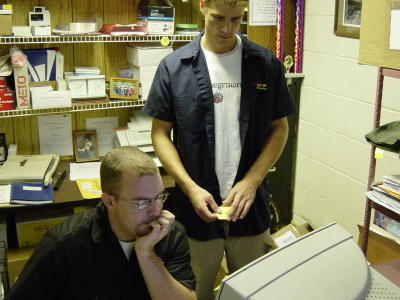 Jon was also active with the local moutain bike trail advocacy club. Performing trail maintenance and repair was his way of giving back to the areas that he loved to ride the most. The club has done a decent job raising funds in this name that will be used to benifit the work the club does such as tools for trail repair and such.

For those not familiar with Jon, that is him on the right in this pic. Circa 2000. Saturday morning picture in the shop. I miss working with these two guys at my last shop. Jon for obvious reasons and Dave, well, he and I had a good old school bond. Dave served our country in the military. Spent time in the Gulf in the early 90's. Likes punk rock and can ride the crap out of a single speed and a downhill bike. Damn.

I will always remember his smirkish smile. Sort of loofy, yet self confident at the same time. The year of his passing was when I got the latest Social Distortion album 'Sex, Love and Rock n Roll'. It's hard for me to listen to 'Angel's Wings' without getting a lump in my chest. Ambitions of love and life fit the situation. Time will keep on rolling, bikes will keep on rolling and memories of Jon will too. We miss you man. Be well.

While I wasn't a close friend of his, he always made sure he said hi to me whenever I was in the shop or when I saw him out riding.

Anonymous said…
Thank you for writing this and remembering Jonathan. here I sit at work on break wishing I could somehow e-mail my sons. Occasionally, I'll put their names into a search engine just to see what comes up. Your blog came up and made me cry. But still I am so grateful to you for doing this.Jonathn and Matthew's MOM, Berit Gantz
3:31 PM

Anonymous said…
Thank you for remembering my brother, Jonathan. You have made my day :) My stomach will always fall whenever I see a mountain biker, in hopes that it is Jonathan. I miss you Jonny and Matthew, Liz Gantz
12:11 PM

Anonymous said…
Like Berit (Jon's mom), here I am almost 7 years after the accident googling Jon's name to see what comes up. I found this and here I am a mess at work. Jon was the love of my life-my best friend and fiance. I know that his family and I will never forget---it's great to see that people like you will also never forget. Thanks for writing this. You made smile, laugh and of course cry.
12:37 PM

stickboybike said…
Thanks for the kind words everyone, on my entry of Jon. We're always close with each other through cycling and even closer when individuals like Jon are involved.